CelebriDucks Testimonials   Over the past few years our CelebriDuck rubber ducks have been reviewed by leading publications worldwide. Here are just a few of the many hundreds of letters our staff has collected from people who collect rubber ducks to companies and corporations who buy our unique rubber ducks for custom promotional items: 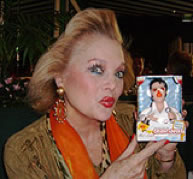 Since Elvis was my actually my first love, let me start by quacking the praises of your little CelebriDucks.  The first song I ever  sang was “To Know Him Is To Love Him”.  I was the lead singer of the Teddy bears and it became a number one hit and was the reason Elvis became my first love.He wanted to meet the girl who sang the song because he loved the sound of my voice. And I loved him and for 9 months we loved each other. I have gone on to be nominated for 10 major music awards: 2 golden globes, 1 Grammy, 5 Emmys, and 2 Oscars. One was for co-writing the theme song from Rocky. “Gonna Fly Now”.. So I am quacking off with Yo Rocky and Go CelebriDucks and I am still quacking music out there!
Carol Connors, 2 time Oscar nominated songwriter www.carolconnors.com Carol Connor’s film reel for 2011 Hollywood FAME Awards http://www.youtube.com/watch?v=txHamomedwk

How is it that these little gems flew under the radar for so long? Rubber Duckies have come of age with CelebriDucks, limited edition rubber duck collectibles detailed to look like duckie versions

of some of the greatest icons of film, music, history and sports.Included in the vast collection are Betty Boop, Elvis, Dr. Frankenfurter, William Shakespeare, Jesus, Barry Bonds and the beloved characters from the Wizard of Oz.More than just a gimmick, these little critters are amazingly detailed, while still maintaining the charming qualities that make rubber duckies so, well, collectible.
Galen Jones Red Nightlife Magazine 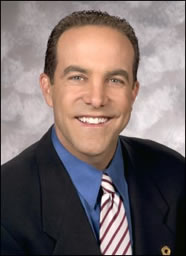 Couldn’t be more impressed. As you promised they are WAY cooler in “real life” than in some internet picture. The packaging is first-rate also.I plan on using them quite often on-air in the near future on 9NEWS, the NBC affiliate in Denver, which is the highest- rated local television station in America.  Thanks again.
Drew Soicher KUSA-TV Sports Anchor

My name is Doc Miller. I am the Music Director/Evening Air Personality for RadioNow 93.1 here in Indianapolis. I have just recently discovered you guys after the Indiana Firebirds came on our show last week. Ray Philwya had a CelebriDuck in his own image, and I thought it was the coolest thing I have ever seen, because parts of my home are decorated with rubber duck collectibles. I just thought I would give you guys credit for a REALLY cool idea. I am just trying to narrow down which ones of the “CelebriDucks” on your site I will buy. Keep it up (or should I say, keep floating?) Doc Miller Music Director/Evening Air-Personality WNOU, Indianapolis (RadioNow 93.1) 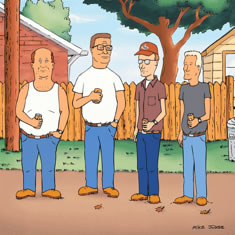 Mr. Wolfe, After reading a great article about your company the latest Kidscreen Magazine, I just wanted to let you know how impressed I am of you and your products I definitely think the sports market was a perfect niche for CelebriDucks. Keep up the great work! (the Osbournes and KISS CelebriDucks are great!)
Kenny Micka Co-Producer King of the Hill 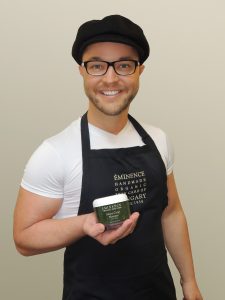 “Working with Celebriducks is the pinnacle of costumer service and first class execution. I experienced nothing but the best example of ‘over deliver and under promise’ philosophy from this company. We received our shipments ahead of schedule and they made sure all of our needs met even with crazy deadlines and unique expectations. Thank you Celebriducks!”
Boldijarre Koronczay
President Éminence Organic Skin Care

“THAT CRAIG WOLFE IS A ‘DUCKING’ GENIUS'”

Lisa Kanarek – found of WorkingNaked.com and author of five books including, Organize Your Home Office for Success and Working Naked: A guide to the bare essentials of home office life. She has been featured — as an author and in interviews — in hundreds of publications including The Wall Street Journal, The New York Times, Newsweek, and Entrepreneur, and has shared her home office expertise on several national programs including, Good Morning America, CNN Financial News, and CNBC, among others. 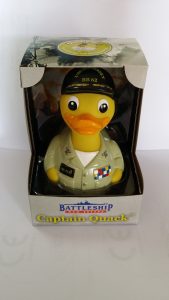 Everyone was thrilled to see the completed Captain Quack.  He arrived yesterday, so we were very busy sending out all the preorders.  The captain’s box is beautiful, and the detail on the production duckie is outstanding.  Thank you for all of your hard work in bringing the new Battleship New Jersey crew member to life!  It was wonderful to see everyone really light up with smiles when they saw Captain Quack.
Donna Klees Museum Director Battleship New Jersey 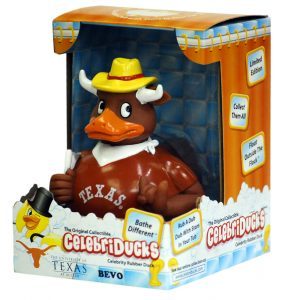 Our Round Rock, Texas Sertoma (service to mankind) club discovered celebriducks 6 years ago. We wanted to have a duck race benefiting local charities and while searching on Google rubber ducks, we saw the Celebriduck website.

We developed our duck race where a business or individual would adopt one of our ducks for $100. The adopter would give us their charity of choice (any local or national charity) and we set it up where the first 5 finishers we would pay out $1500 to those charities. We raced 27 ducks the first year (paid out the $1500 to adopters charities and balance of proceeds ($1200) went to Hope Alliance (local organization helping abused women).

Our race has grown these last 5 years and the payout to adopters charities is now in the $5,500 area and balance of proceeds is also approx $5500. Biggest charity winners over the years for adopters has been our local YMCA, Operation Home Front, Starry (Foster kids). Balance of proceeds have changed a few times from RR Serving Center (food and clothing for needy), Heroes Night Out (center for returning military) and Blue/Brown Santas.

The CelebriDucks are perfect for our typical Texas football rivalries such as UT, Texas A & M, Texas Tech (plus many other states univer

sities) and we have most of the other characters that folks enjoy adopting. We own approximately 180 celebriducks now and our race continues to grow. 6 years results are approx. $25,000 to adopters charities and $25,000 balance going to our local charities. 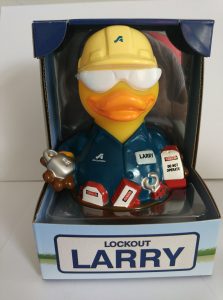 Wow, Craig, Lockout Larry is AMAZING!!!!!!!! I’m obsessed! Thank you thank you thank you! He was SUCH a hit at our tradeshow in Anaheim!! The buzz about him is crazy! Thank  you so very much for getting him to us on time. And you were right – best rubber duck I’ve EVER seen!!! Accuform 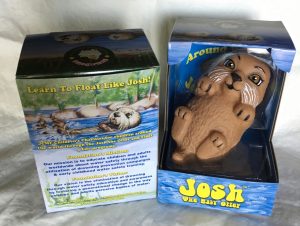 The Josh the Otter turned out sooo good!! I’m really happy with it. Thank you for working with me so diligently on this to make it just right 🙂 Take care.
Ashley Spitsnogle
Art Director

Hi Craig!  I just wanted to reach out to and personally thank you for doing such a great job on the Josh Floatie.  It’s fantastic!!  Thank you for all of your hard work!