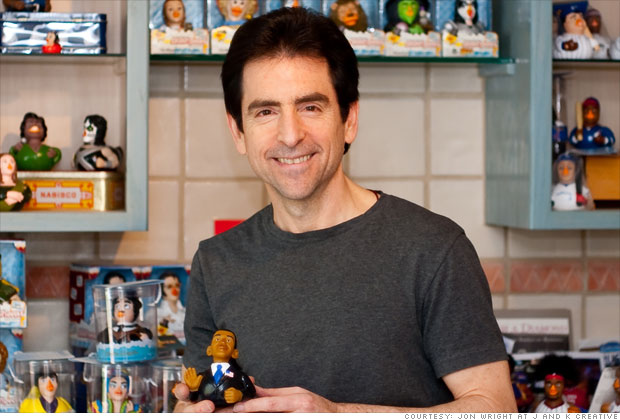 Take one lazy afternoon, an excess of alcohol and two old friends shooting the breeze and what do you get? A great business idea.

Such was the case with CelebriDucks, a new take on an old toy — rubber duckies with famous faces under their bills, like President Obama and Elvis Presley.

“Our most popular, even internationally, is Mr. T,” said founder Craig Wolfe. “I had no idea how much everyone loved rubber ducks.”

He started the company in 1998 with $100,000 he made from selling his precious art animation company. Since that time, CelebriDucks has sold more than one million ducks and will hit $1 million in revenue this year. With 12 to 15 new ducks to be added to the line next year, the company is projected to grow by 50% in 2012.

Not bad for a guy who is the company’s only employee. He outsources all other tasks to 25 subcontractors. He also works from his home in California’s Marin County. “I resist expansion, build organically and turn down all investor’s offers,” he said.

Wolfe negotiates licensing and pays a percentage of every sale to those celebrities or estates he selects to “duckify.” Some licenses are limited like Charlie Chaplin — and after the run, these ducks are “retired from the pond” — he said. Others, like the Jesus duck, will be with us always, he added.

Wolfe is delighted by suggestions he gets for new ducks from fans and collectors. “I keep a running list of celebrities I’d like to depict,” he said “But there are so many ducks and so little time.”

March 7, 2011 craig Comments Off on 365 Days of Startups Interviews CelebriDucks

Story of CelebriDucks Published in Living The Life of My Dreams

March 1, 2011 craig Comments Off on Story of CelebriDucks Published in Living The Life of My Dreams