As of October, 14 million Americans are unemployed. The Labor Department reports that new unemployment applications are averaging over 400,000 per week and the percentage of Americans out of work has been over 9% for every single month but two since May of 2009. In August, zero net jobs were created.

As the unemployment numbers indicate, many Americans are acquiescing to the hand-out of big-government entitlements while others, in the interest of self-preservation, are seeking work outside of the United States.The 2009 World Development Report finds that “Eight million Americans change states every year, migrating to reduce distance to economic opportunity.” Two years later, people are increasingly willing to migrate not only across states but globally, causing a loss of workers in American service, labor, technology and manufacturing sectors. Also lost to overseas employment are talented innovators whose ideas will instead be developed for companies in Singapore, Japan, Malaysia, China, and Europe.

The costs associated with losing even one worker have far-reaching ramifications. Hundreds of thousands of dollars from that individual as well as their family members are lost over time in the money they would have spent on domestic housing, transportation, food, entertainment, taxes, and professional, medical, legal and other services – all money now spent elsewhere for the benefit of a foreign economy.

Perhaps even more concerning are the challenges of survival that business owners face every day. As a solution, more and more are outsourcing work to countries with fewer regulations and cheaper labor.

Outsourcing is more than a trend. As borders become obsolete, the idea of being based in one place and having employees in several others is becoming embedded in the fabric of our society. Even in better times, the domestic economy would have had to adjust to this new way of doing business, but in the midst of a national economic crisis, questions arise as to the greater implications that outsourcing has on the American economy and our ability to compete in a global market.

As Americans face the worst job market in generations, exactly what conditions are driving business owners to outsource, and is it paying off?

I spoke with a few of America’s CEOs and innovators on the reasons that outsourcing is on the rise, the price we’re paying for it and what we need to do to get our jobs back.

When Craig Wolfe, owner of CelebriDucks began his rubber duck manufacturing business in 1998, he had trouble finding all the components he needed to base operations in the United States. First created by Seiberling, rubber ducks used to be made entirely in the U.S. but increasing regulation, cost and a trend away from manufacturing sent the industry entirely overseas.

Today Wolfe’s company has manufactured over a million genuine rubber ducks, including ducks with celebrity faces. Averaging about 100,000 ducks a year, Wolfe does the artwork and sculpting in the U.S. but his manufacturing is in China, where he employs about 100 people.

“At some point we as a country started giving up all our manufacturing to foreign countries with lower wages and fewer regulations and ultimately U.S. facilities couldn’t compete with that. That’s why today we have toys with lead and other safety concerns.”

Wolfe says we gave up manufacturing in favor of technology-based industries, and now we’re even on the backside of that era, as high-tech jobs, too, are becoming global, not U.S. based. “It’s all driven by price and three cursed words: ’Maximizing-shareholder-value.’” Companies are increasing profits by firing people and going overseas and it’s gutting the workforce in America. People are happy when their stocks go up, but they have no idea why they’re going up.” A shrinking workforce in turn leaves behind desolate factories and skilled trades that die off after a generation.

“We’re losing innovation and manufacturing because there’s been too much emphasis on service-oriented industries,” says Wolfe. He says America bought into the notion that services are where it’s at and that manufacturing is old news. Companies that wanted to remain state-side have been squashed out by oppressive government regulation that makes it too cost-prohibitive to continue a “Made in America” policy: it’s either outsource or die.

As a member of the Fair Trade Association, Wolfe says that U.S. factory workers make approximately five times more per hour than their Chinese counterparts. Even with the expense of shipping containers from China, he has less stress, better control and more time for customer service.

Even so, the patriot in Wolfe wants to re-open rubber duck manufacturing at the site of the old Seiberling Estate in Ohio and is in the process of making the transition.

To do this he will have an overall cost increase of 20-25%. He’ll have to continue to import materials, molds, spray masking and other essentials that aren’t available in America, and he’ll increase his liability in everything from worker’s comp to OCEA regulations and a host of litigious areas related to the American business culture.

An additional result of the country’s shift from manufacturing to service is that one of Wolfe’s biggest challenges in re-establishing U.S.-based operations is the remarkable lack of skilled labor. Wolfe says it’s been challenging to find people who are trained in manufacturing and machine operation as well as maintenance and repair. “Seasoned factory workers are ole-timers now,” he says, and training a new generation will have to be an additional component of his expenses.

Even so, Wolfe emphasizes the upside: not be solely dependent on China and basing his plant in Ohio will create jobs for factory workers, truckers, printers, box makers, mechanics, officer suppliers, tool and equipment reps, machine sales, service and repair specialists and administrative and office personnel. That’s not to mention the local cafes, schools, banks and other retail outlets that will receive the residual benefits from a thriving local industry. “It’s really come to light what we’ve done to America,” Wolfe says, “The ripple effect can work in the positive as well as the negative.”

As a society “We’ve gone overboard focusing on money for money’s sake – investing in stocks, dot-coms, the housing bubble and living far beyond our means on credit – now we have foreclosures and disaster. Whenever you put money ahead of ethics it will ultimately fail.”

“As a society, we have to do business more in harmony with ethics. The problem is bigger than policies. It really all comes down to greed.” Wolfe laments the national trend of blaming the other guy for personal economic crisis. Phrases like, “strategic default” have cropped up in financial-speak for people who willingly walk away from home mortgages. This kind of flippant irresponsibility is becoming acceptable in both private and corporate culture. Wolfe recalls companies like Hershey, Ben & Jerry and others that built their business on ethics and a policy of giving back to the local community. And while it’s highly in vogue for a company to wear its environmentalism on its sleeve, much of this has become superficial. “The problem is that we’ve become so overly structured and bureaucratic. Everything is a campaign or a publicity stunt. The human dimension is lost.”

Is there any hope?

“Yes, oh yes, there’s always hope!” says Wolfe. “Life is inherently good and every human being has a spark of good in them.” Wolfe observes the irony that things have gotten so bad that it’s beginning to make people realize the way we’ve been doing things as a culture is not fulfilling, and Wolfe believes that’s causing people to search for ways to make things better.

“We’ve been seeking money for money’s sake; living way beyond our means, worshipping materialism and now it’s all come back to us and we realize that we’re not fulfilled. But that’s a good thing.”

The bigger question is can this kinder, gentler nation translate into more domestic jobs? Perhaps if more business owners think like Wolfe, then there’s a chance. 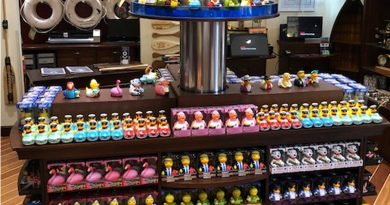 Podcast With Craig Wolfe From CelebriDucks –Mad As A Hatter Show

July 20, 2009 chrisjo Comments Off on Podcast With Craig Wolfe From CelebriDucks –Mad As A Hatter Show